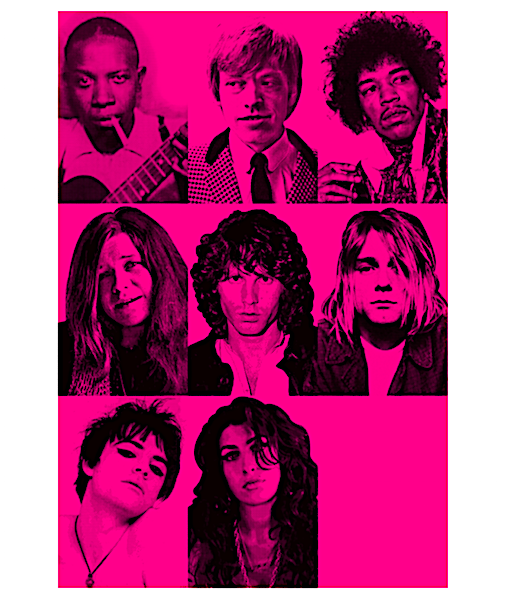 Signed stamped and numbered by the artist.

The ’27 Club’ has maintained an intrigue in the iconic faces that tragically died at the age of 27.  Below Russell Marshall gives us his own perspective…

a) What in your own words, do you think it is that makes the notional group of the ’27 Club’ so interesting to people?

“The legend behind the ’27 Club’ grabs interest as it stems from both myth and rock ‘n’ roll tragedy. From infamous bluesman, Robert Johnson selling his soul to the devil in return for fame and success in the 1930s to the tragic set of events that lead to the loss of Amy Winehouse in 2011, the dark spectre of the 27 Club spans many decades and many genres. Fans of blues, soul, rock ‘n’ roll, grunge, indie, punk, jazz, hip hop, pop – even classical – have all lost icons and heroes to its harsh membership terms. And while on the face of it the ’27 Club’ appears to celebrate rock ‘n’ roll excess – the live fast die young ethos – I believe there is a darker more tragic aspect to consider.”

b) The book, The 27s: The Greatest Myth of Rock & Roll highlights the fact that more musicians have died at the age of 27 than any other age – quite remarkable.  In your eyes and as a massive lover of music, what is the greatest and saddest thing about 27Club? Do you have any particular favourite icons and what is it about their character or music that appeals?

Drugs and suicide feature heavily in the deaths of many of the artists. We struggle to understand why anyone would take their own life – but it can seem even more unfathomable when the individual is blessed with fame, wealth, youth and talent. But I guess success doesn’t make you immune to depression and other mental illnesses. And at 27 you should have everything to live for.

Kurt Cobain hit me the hardest…. We were born the same year. So I was 27 when he died. And I am big fan.  There are many more members of the 27 Club, but I’ve featured the eight I consider to be the most iconic. And left the last frame empty… for a pretty obvious reason. And to make you think.

Own Art is an Arts Council England funded scheme, which is designed to make it easy and affordable to buy contemporary art.

APPLY FOR OWN ART LOAN

‹Back to galleryMore about the artist ›

There are no reviews yet.

Only logged in customers who have purchased this product may leave a review.

Additional shipping costs will be applicable for large, framed or heavier artwork as stated within the product info.